Highly targeted advertisements are the quickest way to grow a nonprofit’s digital community of supporters and increase awareness.

In May, we started working with UnBound Mongolia to increase awareness on the issue of human trafficking in Mongolia and build their community of Facebook supporters.

Mongolia ranks number 16 in the world for percentage of population enslaved. “People tend to avoid the topic of human trafficking in Mongolia,” says Hannah Franzen, who helped start the UnBound branch in Mongolia. “Our goal is to educate the public on the fact that most prostitutes are actually victims of human trafficking.”

UnBound conducts training sessions at schools and community centers in Mongolia. UnBound’s Facebook page has played an important role in keeping people engaged and educated after the training sessions, and also reaching the public at large.

UnBound has identified several target audiences, including young men, businesspeople, law enforcement, and legal professionals, all of which have different motivations or vested interest in seeing the end of human trafficking. Each group must receive different messaging.

Our first target was young men in Ulaanbataar, the capital of Mongolia. Using Facebook audience insights, we discovered that our target market loves basketball. We used this insight to build a comparison that would make sense to this audience. The advertisement below reads “Human trafficking is a $32 billion dollar industry. That is bigger than the NFL, NBA and MLB combined.” 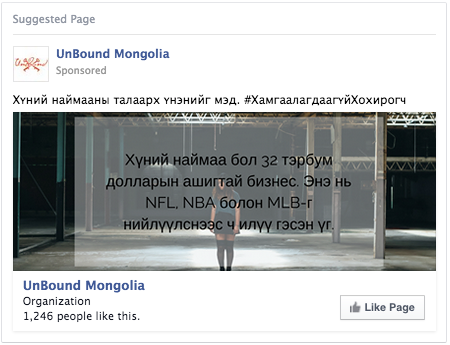 “Human trafficking is a $32 billion dollar industry. That is bigger than the NFL, NBA and MLB combined.”

For $7.00, UnBound Mongolia reached 27k young men in Ulaanbataar. 591 took action on the ad, either by clicking the ad, liking the page, or viewing content on the Facebook page. For only $0.03 per page like, UnBound Mongolia increased its fan base by 222 people.

Each month, UnBound Mongolia will create advertisements with targeted messaging to each of their audiences to grow their community of supporters and share from their blog.

Ready to Get Started?